SHE’S the new golden girl of the track after clinching two global titles at the world para athletics championships in London. Here, record-breaking Sammi Kinghorn talks exclusively to Mattioli Woods about the devastating accident which robbed her of her mobility – yet proved the springboard for a sporting life she had never imagined.

FOR Sammi Kinghorn, life changed for ever on a winter’s afternoon in 2010.

She was 14. A happy-go-lucky teenager enjoying the freedom of her youth on her parents’ farm in the Scottish Borders.

As she helped clear snow, a freak accident involving her father’s forklift left her badly injured – and never to walk again.

For five long months, she was a patient at the Southern General Hospital in Glasgow where she underwent surgery, intensive physiotherapy and learned to use a wheelchair.

In what she now calls her “darkest” hours, the convalescing Sammi had no idea what sort of future lay ahead.

Paralysed from the waist down, she admits there were days when she felt life was passing her by as she lay in her hospital bed.

It happened when she was taken to watch the inter-spinal unit games at Aylesbury in Buckinghamshire – an event which gives newly-injured patients the chance to discover and compete in a range of wheelchair sports.

“Being 14, it was hard to come to terms with the fact I had my whole life in front of me without the use of my legs,” she reflects.

“But seeing the chair racers whizzing round the track at the games – faster than able-bodied runners – really intrigued me. I just thought it was really cool – really fast”.

From that moment, Sammi was hooked.

Within 12 months, she had her first racing chair – bought thanks to the fund-raising efforts of her family and local community – and linked up with coach Ian Mirfin.

She spent the next two years juggling her studies with a tough training regime and taking part in competitions. In 2014, she finished school and opted to defer going to university to concentrate fully on chair racing.

The decision yielded instant results. She finished fifth in the Commonwealth Games in Glasgow and went on to win three golds at the European Championships a few weeks later.

She arrived at the world para athletics championships in London optimistic of success in the 200 metres event, but expecting little else. She left with two global titles, a bronze and a new world record.

“It’s been absolutely nuts,” she says. “I still can’t believe the week I’ve had – it just hasn’t sunk in yet”.

Yet Sammi is in no doubt when asked to single out the highlight of the most memorable week of her racing career.

“Seeing my mum and dad in the crowd after winning my first gold and setting a world record time,” she recalls without hesitation.

“They were near the finishing line and both were in tears. I went over to them on my lap of honour and we just hugged. I don’t usually cry – but there was no stopping it this time. It was so emotional after everything that’s happened”.

She added: “I wouldn’t have achieved any of this without them. I’ll never be able to repay them for all the hours they spent driving me around to training and attending every event I entered. Mile after mile. Week in, week out”.

For Sammi, her gold-winning performances at London’s Olympic Stadium in the world para athletics championships are a stepping stone towards her greatest ambition – the 2020 Summer Olympics in Tokyo.

After a short break, she will continue to train twice a day, six days a week as builds up to the biggest challenge of her short, but flourishing racing career.

“Before my accident I had never considered myself likely to make it as a sportswoman. I just played things like hockey and did gymnastics with friends for the social involvement,” she reveals.

“But when something like that happens to you, you have learn to be yourself over again. Chair racing has played a big part in my recovery.

“I look to take the positives from my situation rather than dwell on the past. I consider the accident has provided me with this great opportunity. When I get to the start line in Tokyo, I’ll feel so grateful for the chance”.

Sammi celebrated her London glory with friends and fellow athletes at a party hosted by Team GB before a visit to the West End to watch a performance of the hit musical, Dreamgirls.

She leaves the capital with her own dreams on the verge of becoming reality.

With the unyielding support of her parents, Neil and Elaine, and the expertise of coach Ian Mirfin, the catastrophic accident which robbed Sammi of so much is now the key to her dominance on the world stage for years to come. 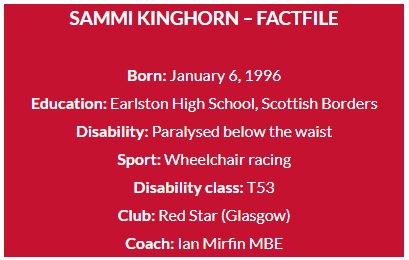 COACH Ian Mirfin has been with Sammi throughout her journey from novice to record-breaking world champion.

He has been her mentor since she joined the Red Star Athletics Club in Glasgow, a venture he set up as Scotland’s first specialist club for athletes with disability.

She turned up at a come-and-try session and asked about getting involved. Ian advised her to take some time to think about it.

A few months later an email pinged into his inbox. It was from Sammi. The message was brief and to the point. It read: "Hey, remember we spoke? That's me ready to go now."

He says her talent was obvious from the start, but attributes her “meteoric” rise to her drive and application.

“She puts in the hard work and wants to be the best she possibly can. I’m really pleased for her – she deserves the success she has achieved”.

Ian paints a candid picture of Sammi that her followers and sports fans don’t get to see.

“When she meets people she doesn’t talk of her racing career and everything she has done. She is very modest, humble and incredibly respectful”.

He adds: “What she tries to do is demonstrate to everyone that no matter what happens to you in life, you can achieve anything if you are determined enough. That’s exactly what Sammi has done”.


IAN Murfin says sponsor Mattioli Woods can “rightly claim some of the credit” for Sammi’s success.

The company has been one of her main backers for more than four years, enabling her to meet the travel costs involved in motoring to events and attending training sessions.

“A thousand thanks to Mattioli Woods who got involved long before she had achieved anything and have remained among her biggest supporters ever since,” he explains.

“It is fantastic that the firm has been there for her all this time without ever asking for anything back. I can’t speak highly enough of what this sort of sponsorship can mean to an athlete like Sammi, especially in the early days when they are trying to establish themselves”.

Her mum Elaine said: “Mattioli Woods has sponsored Sammi right from the start. Without them, she would certainly not have achieved her dreams.
“Mattioli Woods has enabled Sammi to travel to competitions, to achieve qualifying times needed to reach her goals, and to pursue her sport at the highest level.

“We, as a family, will be forever grateful to Mattioli Woods for its sponsorship and support”.