HOW DO YOU PREPARE FOR THE LONDON MARATHON IN A PANDEMIC?

Participants will have 23 hours and 59 minutes and 59 seconds (from 00:00 to 23:59:59 BST) to complete the 26.2 miles and our very own Amit Joshi and Chetan Mistry are taking part in aid of our national charity, Alzheimer's Research UK. 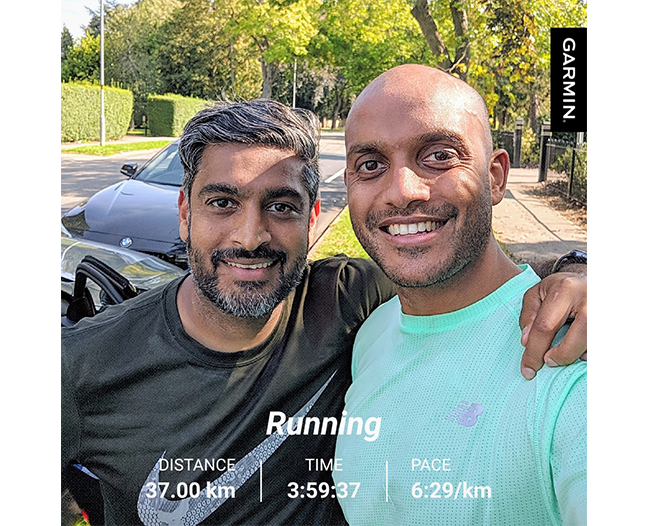 We had a chat with Amit to see how they are both getting on with training ...

Chet and I both had grandparents who lived with dementia so the Alzheimer's Research UK charity is very close to our hearts.  In addition, we've both been keen runners since mid-2019 when we took part in the Leicester Half Marathon to raise money for Cardiac Risk in the Young in memory of our work colleague, Ketan Radia.

Our training method for the London marathon started off as ... run as fast as we can for as long as we can.  Our colleague and veteran marathon runner George Houston quickly pointed out that this was not sensible (George ran the London Marathon in 2016).

Our new and improved training plan officially officially started on 4 January with a 10 mile (freezing cold) run.  The plan then dictated four runs a week.

We trained up until the end of March when it became apparent, due to Covid, the official date of 26 April 2020 was going to be cancelled, so instead both Chet and I ran virtual half marathons on the day. We then picked up our training again from mid-June.

The best part of running has been the running partners throughout the last 10 months including our coach, George Houston, Saj Ekanayake and Dav Grewal, who are all fellow workmates.  Chetan's wife also joined us. Huge thanks to all of them for keeping us going!

We now understand the need to be a little crazy to run a marathon – the commitment required is extreme. However, once you become a runner the feeling when you finish a long run is the best! It is also one of the most addictive pastimes you can do and if you would like to know more about how we did it, let us know!

Please support Amit and Chetan by donating to their Just Giving Page.